Commercial refrigeration covers a wide range of premises from small cafes to large supermarkets, and refrigeration requirements from frozen to chilled produce. The main categories are:

The F-gas Regulation 517/2014 and Commercial Refrigeration

In addition to the general F-gas Regulation requirements and the HFC phase-down leading to the use of lower GWP refrigerants, the commercial refrigeration sector has two specific use bans in addition to the ban on the use of virgin refrigerants with a GWP higher than 2500 for the maintenance of existing installations from 1 January 2020.

Stationary refrigeration equipment, that contains, or whose functioning relies upon, HFCs with GWP of 2 500 or more except equipment intended for application designed to cool products to temperatures below – 50 °C.

The HFCs R-134a and R-404A have been widely used in commercial refrigeration. Lower GWP non-flammable HFCs and HFC/HFO refrigerants are now being used or implemented, with R-134a continuing to be used for centralised systems in cascade circuits. The adoption of low GWP A2L refrigerants for commercial refrigeration must deliver on safety, energy consumption and cost effectiveness in comparison to other low GWP solutions and this is being demonstrated. 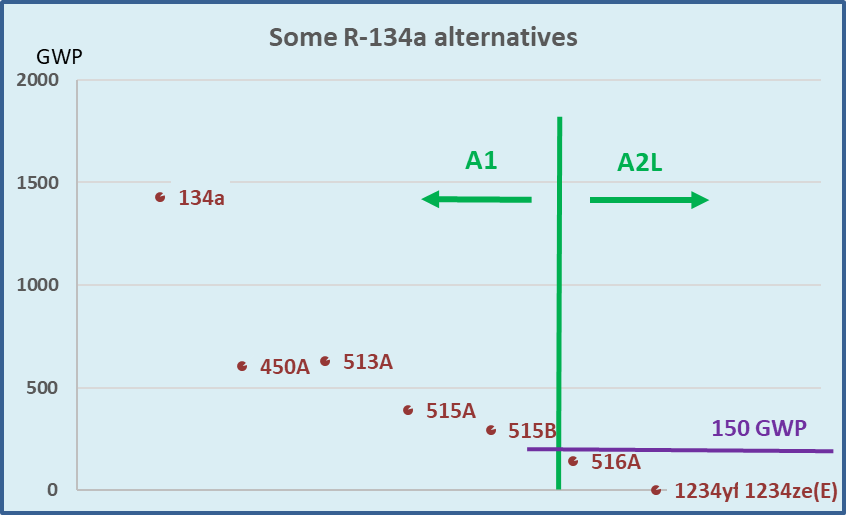 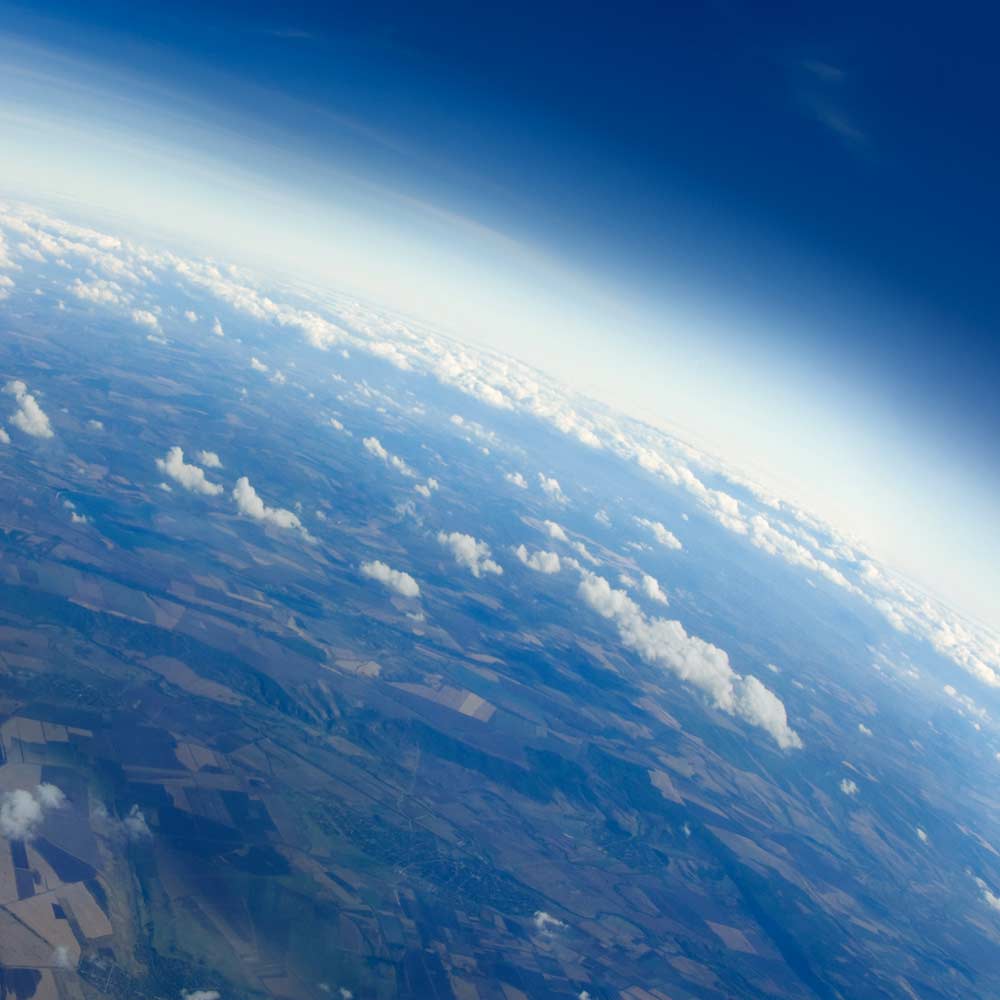 Developments resulting from the F-gas Regulation Use Bans: The 1 January 2022 use bans for centralised systems rated capacity above 40kW with a 150 GWP limit and the primary circuit of cascade systems with a 1500 GWP limit is leading to the adoption of low GWP A2L refrigerants for commercial refrigeration. These must deliver on safety, energy consumption and cost effectiveness in comparison to other low GWP solutions and this is being demonstrated for HFC/HFO blends having GWPs above and below 150.

The HFC/HFO refrigerant R-454A (GWP 238) system is claimed to deliver efficiency improvements over natural alternatives with leakage rates below 4% for new systems at a lower cost to the industry-leading technologies. In an operating store, the R-454A system used a conservative approach for the risks of the A2L refrigerant. As R-454C has a GWP >150 the medium temperature system is under 40 kW in capacity and below the 54 kg charge limit required by European Standard EN 378. One aim was to create an A2L design standard over time so that any lower flammability refrigerant could be used.

R-454C (GWP 148) has been evaluated in a new convenience store installation, with the objective of maintaining the advantages of R-404A, including ease of installation and maintenance, cost efficiency, safety, and energy efficiency, while using a low GWP refrigerant. The aim was to meet long-term sustainability and GWP requirements of the F-Gas regulation and comply with necessary requirements and standards (EN378) for A2L refrigerants.

System configurations for Cascade + Indirect systems compatible with the 2022 use ban already being used are:

The drive to replace R-404A with refrigerants having GWPs less than 2500 started before the 2014 F-gas Regulation, with R-407A and R-407F being widely used. More recently refrigerants with GWPs around 1400 to 1500 are being used such as R-448A, R-449A, R-407H. Retrofit experience has shown reductions in energy consumption with these refrigerants.

For larger supermarkets, energy use is typically considered as a whole, including the building HVAC, water use, lighting and the commercial refrigeration, with heat recovery being a key contributor to minimising energy consumption particularly where space heating is a seasonal requirement. For smaller stores heat rejection from display cases can contribute to additional air-conditioning load or provide useful heat in cooler climatic conditions. Large supermarkets have centralised systems as they usually achieve better energy efficiency than stand-alone display cases and condensing units and allow for effective heat recovery and systems to improve the energy consumption of the overall store.  A machine room contains systems that operate at two temperature ranges, -10 and -15°C for the preservation of fresh products (medium temperatures) and the other at around -35 to -38°C for frozen products (low temperatures). 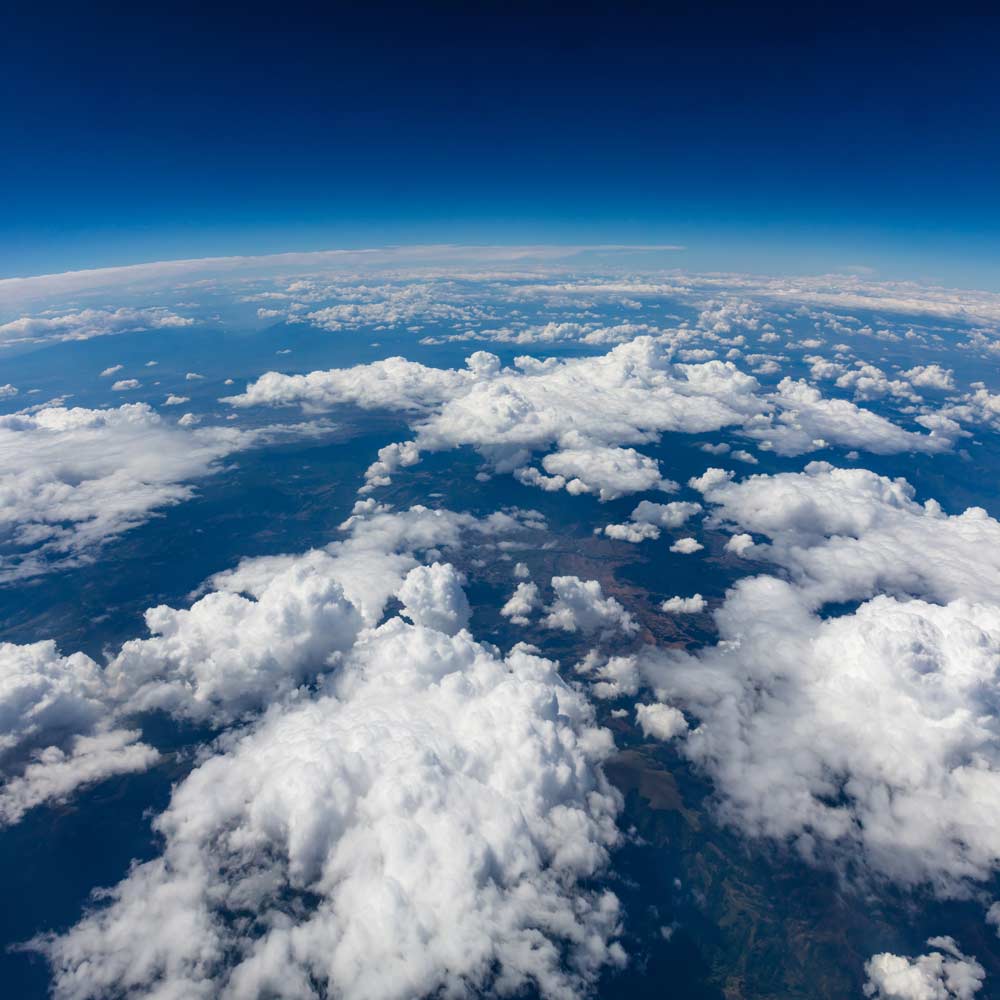 A condensing as a minimum consists of a compressor, a condenser and a fan, and it is located outside or where there are several units potentially in a small machine room with ducted outside air and fan cooling. When connected to display units having evaporators it forms a refrigeration circuit.  Typically, condensing units are used for premises with small cooling capacity requirements such as convenience stores, mini-supermarkets and restaurants.

Lower GWP non-flammable HFCs and HFC/HFO blends can be used to retrofit or replace R-134a or R-404A for current equipment taking into account the particular refrigerant performance, equipment manufacturer approval and for R-404A replacements, the discharge temperatures achievable with the replacement refrigerants. While R-134a has a GWP less than 2500 limit, lower GWP alternatives can be used and include R-450A (GWP 605) and R-513A (GWP 631). For R-404A replacement the options include R-407A, R-407F, R-407H, R-448A, R-449A, and R-452A having GWPs in the range 1387 to 2140.

The use of lower GWP mildly flammable A2L fluorocarbon-based refrigerants requires the condensing unit design, location, and refrigerant charge to take into account the specific requirements for flammable refrigerants.  For medium temperature applications the HFOs R-1234yf or R-1234ze(E)  or R-516A offer similar energy efficiency to R-134a.  For R-404A, the possible A2L refrigerants include R-454A, R-454C, R-455A and R-457A, some having GWPs below 150.

A condensing unit can have several compressors, are designed for several capacities and are standardised equipment. Since July 2018 new units must meet the energy efficiency Eco-Design requirements of Regulation (EU) 2015/1095. The most common refrigerants have been R-134a for medium temperatures (typically 0°C and 10°C) and R-404A for medium and / or low temperatures (<-18°C) for food storage.

Some units with small refrigerant charges that previously used R-134a are now using a small hydrocarbon refrigerant charge, similar to domestic refrigerators.  However, where the use of highly flammable hydrocarbons is a concern, and mildly flammable A2L refrigerants can be used, the HFC/HFO blend R-516A (GWP 142) or the HFOs R-1234yf and R-1234ze (E) (GWPs <1, AR5 value) are alternatives to R-134a and achieve similar energy efficiency. Non-flammable lower GWP HFC/HFO blends are also available as alternatives to HFC-134a.

For the replacement of R-404A, HFC/HFO blends offer similar performance for this application and are either non-flammable lower GWP refrigerants (R-448A, GWP 1387) or mildly flammable (A2L classification) with lower GWPs such as R-454A (GWP 238) with some having GWPs less than 150 (R-455A, GWP 148; R-454C, GWP 148) and offer similar or improved energy consumption compared to R-404A.