Metered Dose Inhalers (MDIs) are one the two main types of inhalers for the delivery of respiratory drugs, for the treatment of asthma and chronic obstructive pulmonary disease (COPD); the other is Dry Powder Inhalers. MDIs are also known as pMDIs (pressurised metered dose inhalers).

Inhaled therapy is essential for the treatment of asthma and chronic obstructive pulmonary disease (COPD).

Why MDIs and DPIs are both used. There are two main types of inhalers for the delivery of respiratory drugs: the metered dose inhaler (MDI), which uses HFCs (mainly HFC-134a, and some HFC-227ea) as the propellant and the dry powder inhaler (DPI). The choice of the most suitable inhaler is a complex decision taken between doctor and patient. MDIs with spacers provide a cost-effective option for patients with low inspiratory flow, such as patients with severe lung disease and very young children, and for severe asthma attacks (where nebulisers are the alternative).

“It is important to note that MDIs, DPIs and other delivery systems all play an important role in the treatment of asthma and COPD, and no single delivery system is considered universally acceptable for all patients. Similarly, not all active ingredients are available equally as either an MDI or DPI. Healthcare professionals continue to consider that a range of therapeutic options is important. Any consideration of policy measures to minimise the environmental impact and carbon footprint of inhaled therapy should carefully assess patient health implications with the goals of ensuring patient health and maintaining a range of therapeutic options, as well as assessing economic implications. Each country has its own unique and complex makeup in terms of availability of medicines, overarching health care systems, and patient preferences.” From Medical and Chemical Technical Options Committee 2018 Assessment Report.

Asthma and chronic obstructive pulmonary disease (COPD) are the most common chronic diseases of the respiratory tract.

Asthma increased rapidly in the second half of the 20th century and now affects over 300 million people worldwide. Both are identified as key health targets by the WHO.

MDIs use a propellant to deliver drug to the lungs.

“An inhalation propellant must be safe for human use and meet several other criteria relating to safety and efficacy. Traditionally the list would include: (i) liquefied gas, (ii) low toxicity, (iii) non-flammable, (iv) chemically inactive and stable, (v) acceptable to patients (in terms of taste and smell), (vi) appropriate solvency characteristics, and (vii) appropriate density.” From Medical and Chemical Technical Options Committee 2018 Assessment Report.

HFC based MDIs were introduced in the EU in 1994 to replace CFCs. MDIs have been subjected to extensive regulatory assessments for safety, efficacy and quality. HFC MDIs are available to cover all key classes of drugs used in the treatment of asthma and COPD. The number of patients using HFC based asthma inhalers in the EU is estimated to be at least 5 million.

Irrespective of their proven benefits for the treatment of asthma and COPD and their continued availability under the F-Gas Regulation, the GWPs of HFC-134a (F-Gas AR4 1430) and HFC-227ea (3220) have increased the focus on their use as propellants for MDIs.  However, the selection of a potential candidate and a new propellant development programme requires significant investment.

“An inhalation propellant must be safe for human use and meet several other criteria relating to safety and efficacy. Traditionally the list would include: (i) liquefied gas, (ii) low toxicity, (iii) non-flammable, (iv) chemically inactive and stable, (v) acceptable to patients (in terms of taste and smell), (vi) appropriate solvency characteristics, and (vii) appropriate density. Not all of these requirements may be essential for an alternative propellant, but careful study and justification would be required to support any significant change. It is, however, extremely difficult to identify chemicals fulfilling all of these criteria, and which are also environmentally acceptable.”

New Low GWP Propellants: In December 2019, a European pharmaceutical company announced a low GWP HFC-152a metered dose inhaler (MDI) with plans to introduce it by the end of 2025. HFC-152a will reduce the carbon footprint of the MDI by about 90% to a level similar to a dry powder inhaler (DPI), due to its low GWP (F-Gas AR4 124). The boiling point of HFC-152a (-24.7°C) is very similar to that for HFC-134a (-26.2°C). However, whereas HFC-134a is non-flammable, HFC-152a is moderately flammable with a lower flammable limit (LFL) of 3.8%, and therefore its adoption requires MDI manufacturing to address additional flammability safety issues. Inhalation safety and toxicology studies are also required. The toxicology of HFC-152a is well known as an industrial gas (similar to HFC-134a) but testing for MDI use is required to GLP standards and to medical protocols.

In January 2020, another European pharmaceutical company announced that it would launch its next-generation inhaler to treat asthma and chronic obstructive pulmonary disease (COPD) with near-zero GWP propellants by 2025. It expects the propellant used in the next generation pressurised metered-dose inhalers (pMDI) to have a GWP that is 90-99% lower than propellants used in older pMDIs.

It is expected that HFC-134a and HFC-227ea will continue to be used for MDIs for a considerable time, not least due to the timescale for any transition to lower GWP propellants.

The estimated carbon dioxide equivalent of an average dose of an HFC-134a MDI (200 gCO2-eq, is comparable to the climate impact of everyday items, such as a 330ml can of Cola (170 gCO2-eq), 250 ml of orange juice (360 gCO2-eq), and a kilometre driven in a small car (99 gCO2-eq). DPIs have a carbon footprint less than one-tenth the impact of currently used HFC MDIs. However low GWP MDIs, using HFC-152a or HFO-1234ze(E), have a carbon footprint similar to DPIs. A more detailed comparison of life cycle environmental impacts has recently been published (Life cycle environmental impacts of inhalers Harish KumarJeswani and Adisa Azapagic, Journal of Cleaner Production, Volume 237, November 2019, https://doi.org/10.1016/j.jclepro.2019.117733)

Estimates of carbon footprints of a selection of respiratory devices and treatment methods (circa. 2014 except for HFC-152a)

According to MCTOC 2018, based on HFC manufacturing industry estimates, approximately 800 million or more HFC MDIs (with average fill weight 13-14.5 g/MDI) are currently manufactured annually worldwide, using approximately 11,500 tonnes HFCs in 2018. HFC-134a makes up the major proportion, with HFC-227ea accounting for about 8 percent. This corresponds to direct emissions with a climate impact of approximately 18,000 ktCO2-eq. For the year 2016, HFC propellant consumption for MDI manufacture corresponded to direct emissions that are estimated to be about 2 percent of global GWP-weighted total emissions of HFCs.

If a propellant with GWP <150, such as HFC-152a, were to be adopted generally then the emissions due to MDIs could fall by about a factor of about 10. The global impact of replacement of CFCs by HFCs and potential for a further transition to <150 GWP fluorocarbon propellant is shown in the chart using AR4 GWPs for the CFCs and HFCs. If HFO-1234ze(E) were to be used then the reduction would be even greater. 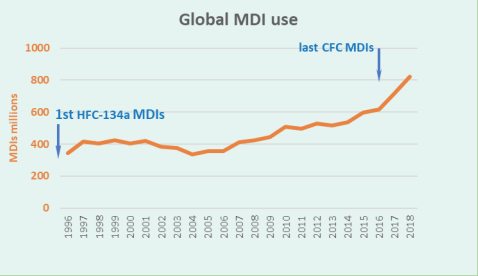 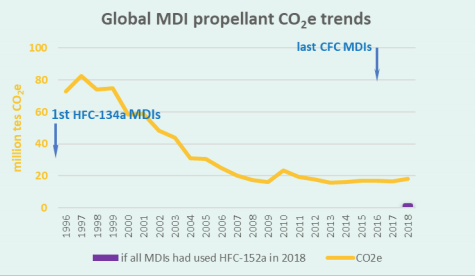