In this round-up: European Commission publishes a report on the functioning of the EU-wide quota system for hydrofluorocarbons (HFCs) with a section on illegal trade; EFCTC press release on cuts in HFC quotas for 2021, meaning enforcement will be critical and supported by the Commission rigorously implementing the Ultimate Beneficial Owner principle; EFCTC welcomes EU Single Window Environment for Customs proposal which will contribute to the fight against illegal trade of HFC gases; Scottish company gets UK funding for illicit refrigerant project; General press articles about illegal trade; Seizures of illegal HFCs in Spain and sale of online dangerous mixtures in USA. Note this round-up covers the period from November.

European Commission publishes a report on the functioning of the EU-wide quota system for hydrofluorocarbons (HFCs). The findings of this report will serve as input to the review of the EU rules on fluorinated greenhouse gases that the Commission launched as part of the European Green Deal and the Climate Law proposal. In the section on illegal trade. “There is clear evidence of illegal imports of HFCs into the EU, a behaviour incentivised by the high EU prices seen in 2017 and early 2018 compared to the world market. Customs have increasingly been seizing illegal shipments as border enforcement is being ramped up.” The report notes that: “Industry has pointed to discrepancies between Chinese export data and EU import data for some years (2018) as well as increasing imports to EU neighbouring countries as reasons for concern. However, given that such discrepancies are not uncommon in international trade statistics and are often related to trade (re-)routing, it does not appear feasible on the basis of this data alone to make a sound quantification of the extent of illegal imports and hence their relevance for the price development and Union gas availability. Nonetheless, the Commission is taking these claims very seriously and is working together with industry and the Member States to put a stop to such activities.” The report, in its conclusion, states that it will be important to closely continue monitoring the market and gas prices going forward, as well as effectively prevent any illegal activities, in particular as another phase-down step (to 45% of the 2015 baseline) is foreseen for 2021. The EU Customs Single Window – Certificate Exchange (EU CSW-CERTEX) project should, from 2021 onwards, greatly support these efforts by introducing automatic checks at customs of requirements under the F-gas Regulation.

Read the Commission news announcing the report and the REPORT from the Commission on the availability of hydrofluorocarbons on the Union market 16.12.2020 C(2020) 8842 final

A Cooling Post article on the Commission report leads with Commission questions illegal F-gas figures. The European Commission has admitted there is “clear evidence” of illegal HFC imports but has questioned the extent of the problem as reported by stakeholders. In a new report on the functioning of the EU-wide quota system for HFC under the European F-gas regulation (517/2014), the Commission insists that it is taking the claims seriously with the involvement of OLAF, the European Anti-Fraud Office, and increasing customs seizures.

Commission sets the stage for the next cut in HFC quotas for 2021, enforcement will be critical. In a press release EFCTC welcomes the European Commission’s recent Implementing Decision 2020/1604 2 which lists companies which have placed Hydrofluorocarbons (HFCs) on the EU market. Since the introduction of the F-gas Regulation, the EU market has seen a surge in illegally imported HFCs, estimated at 33% more than the legal quota allowance. EFCTC has been raising concerns for over two years over the large quantities of HFCs that are illegally entering the EU. By rigorously implementing the Ultimate Beneficial Owner principle, the European Commission has taken action to ensure that legitimate companies receive HFC quotas to control illegal imports that have major economic and environmental consequences. Read the complete EFCTC press release or a related article Member states must step up F-gas enforcement. Faced with a further large cut in the European HFC quota next year, and ongoing concerns with the high level of illegal imports, the EFCTC has called on member states to ensure that the 1,386 provided with quota are in compliance with the REACH regulations and can legitimately import and sell HFCs in the EU. Cooling Post

EFCTC welcomes EU Single Window Environment for Customs proposal which will contribute to the fight against illegal trade of HFC gases. The EU Single Window Environment for Customs will provide a real-time connection between the EU’s HFC Registry which monitors the quota allocation and the Single Administrative Document which monitors trade with non-EU countries. Read the press release here.

Sign up to help to end the illegal HFC trade https://stopillegalcooling.eu/pledge/

Illegal refrigerant imports could have cost the Spanish government as much as €50m in lost taxes, according to a leading Spanish refrigerant supplier. Cooling Post

Help stop the biggest black market you’ve never heard of. Everyone must work together to break the black market refrigerant chain one link at a time. The pervasive market is affecting all areas of the value chain; car garages, corner shops, hotels and many other industries all over Europe could be using these illegal HFCs. ACR Journal

That gas that attracts air pirates. There is a dangerous market for illegal hydrofluorocarbons (HFCs) from China. The campaign of the sector group that encompasses the main EU producers starts. la Repubblica article in Italian.

Interview with Cristian Bușoi MEP, who chairs the European Parliament’s committee on industry, research and energy (ITRE). Firstly, and this is very important, it is essential to understand how well the F-gas regulation is working and whether or not it is resulting in reducing emissions of HFCs and driving the replacement of high-global warming potential HFCs with lower GWP alternatives. One issue that needs further study is the reports that we are seeing about illegal trade in HFCs. Read the complete article in Euractiv.

The dark underbelly of the illicit trade in F-gases. “Illegal imports have been piggybacking on the fact that prices were very high mainly in 2017-18 and these products are freely available in China”. Read the complete article in Euractiv. 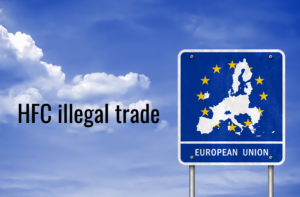