The US NOAA (National Oceanic and Atmospheric Administration) has released its 2021 update of the AGGI (Annual Greenhouse Gas Index), which follows the evolution of the radiative forcing (ability of all GHGs to trap heat) since the onset of the industrial revolution. The HFC contribution in 2021 is now 1.18% of the total (compared to 1.13% in 2020).

In total CO2, CH4, N2O, CFC-12 and CFC-11 account for about 96% of the direct radiative forcing by long-lived greenhouse gases since 1750. The remaining 4% is contributed by 15 other halogenated gases including HCFC-22 and HFC-134a. Only direct forcing from all these gases has been included. Carbon dioxide is by far the largest contributor to total forcing from these gases, contributing about 80% of the increase since 1990, with methane the second largest contributor.

CFCs: Had ozone-depleting gases not been regulated by the Montreal Protocol and its amendments, it is estimated that climate forcing would have been much greater by 2010 equivalent to more than half of the increase in radiative forcing due to CO2 alone since 1990. The direct radiative forcing from CFCs and related gases has declined in recent years, after peaking in 2000. Increases in HCFCs and HFCs have offset the decline from CFCs so that radiative forcing from the sum of these three chemical classes has changed very little over the past decade.

HFCs: While the radiative forcing from HFCs has been small relative to other GHGs, the potential for large future increases led to the adoption of controls on HFC production in the Kigali amendment to the Montreal Protocol.

Figure 1 shows the trend in atmospheric concentration for HFC-134a, the most widely used HFC, compared to other main GHGs. 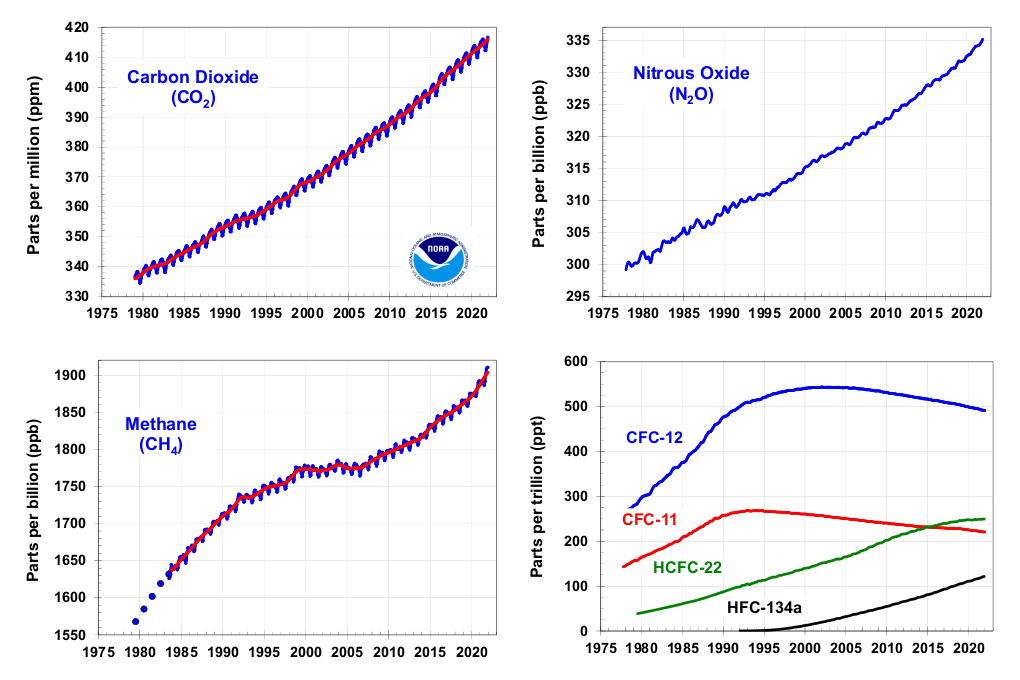 Figure 1: Global average abundances of the major, well-mixed, long-lived GHGs - carbon dioxide, methane, nitrous oxide, CFC-12 and CFC-11; and HCFC-22 and HFC-134a from the NOAA global air sampling network since the beginning of 1979.

The Annual Greenhouse Gas Index (AGGI) is calculated as the ratio of total direct radiative forcing due to these gases in a given year to its total in 1990. 1990 was chosen because it is the baseline year for the Kyoto Protocol and the publication year of the first IPCC Scientific Assessment of Climate Change. Most of this increase is related to CO2. For 2021, the AGGI was 1.49 (representing an increase in total direct radiative forcing of 49% since 1990). This is shown in Figure 2. 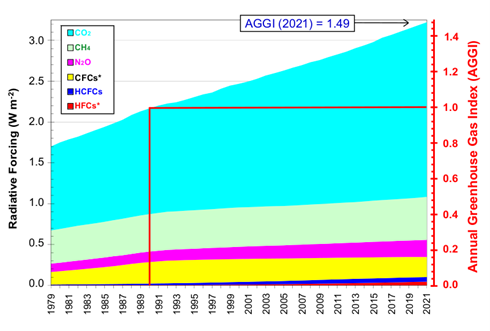 Radiative forcing is the change in the net, downward minus upward, radiative flux (expressed in Watts per square metre; W m-2) at the tropopause or top of atmosphere due to a change in an external driver of climate change, such as, for example, a change in the concentration of carbon dioxide (CO2) or the output of the Sun. For the purposes of the WG1 AR5 report, radiative forcing is further defined as the change relative to the year 1750 and, unless otherwise noted, refers to a global and annual average value.