ANNEX to News item: Update on the PFAS restriction proposal and F-gases by the Norwegian Environment Agency 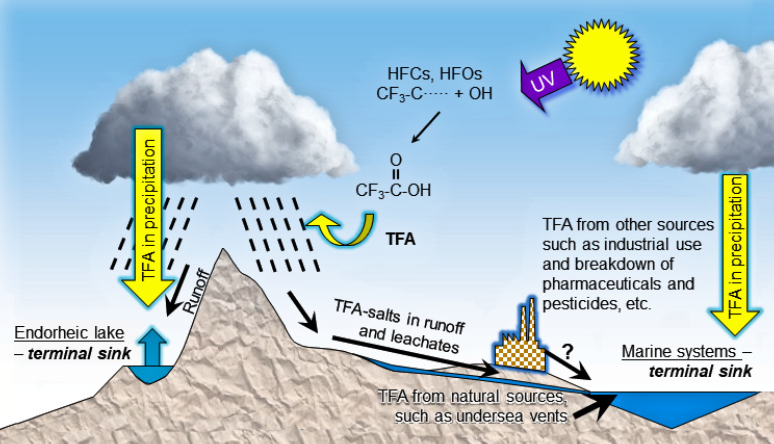 These highest annual mean concentrations [of TFA] are at least 60 times lower than previously determined to be a safe level for the most sensitive aquatic life-forms. Rainwater concentrations during individual rain events would still be 1 order of magnitude lower than the no effect level.

Automobile air conditioning HFO-1234yf emissions are predicted to produce concentrations of TFA in Eastern U.S. rainfall at least double the values currently observed from all sources, natural and man-made. Our model predicts peak concentrations in rainfall of 1264 ng L-1, a level that is 80× lower than the lowest level considered safe for the most sensitive aquatic organisms.

This projected inventory is a necessary first step in analysing for potential atmospheric and ecosystem effects, such as ozone and trifluoroacetic acid production, that might result from widespread replacement of HFC-134a with HFC-1234yf.

“Impacts of the Degradation of 2,3,3,3-Tetrafluoropropene into Trifluoroacetic Acid from Its Application in Automobile Air Conditioners in China, the United States, and Europe”[5]

The TFA concentrations in rainwater were strongly affected by the regional precipitation rates. North Africa and the Middle East regions with scant rainfall had extremely high TFA concentrations. The rainwater concentrations of TFA during individual rain events can exceed the level considered to be safe, indicating substantial potential regional risks from future HFO-1234yf use.

BUT see the 2021 paper for that investigates deposition for India, China, and the Middle East.

Trifluoroacetic acid deposition from emissions of HFO-1234yf in India, China, and the Middle East (2021)[6]:

The mean and the extremes of TFA rainwater concentrations calculated for the four emission scenarios from GEOS-Chem and WRF-Chem were orders of magnitude below the no observable effect concentration. The ecological and human health impacts now, and the continued use of HFO-1234yf in India, China, and the Middle East, are estimated to be insignificant based on the current understanding, as summarized by Neale et al. (2021).

The paper includes a comprehensive summary for TFA and points out that most PFAS have different properties from TFA. Some HFCs and some HFOs breakdown produce TFA in the atmosphere. The summary has these important findings, but also covers these issues in much greater detail:

In its Summary Update 2020 for Policymakers[8], the UNEP Environmental Effects Assessment Panel has summarised these scientific conclusions for TFA (paragraph 2.3 - Air quality and contaminants):

“The current low concentration of trifluoroacetic acid (TFA) produced by the degradation of several hydrofluorocarbons (HFCs) and hydrofluoroolefins (HFOs), is currently judged not to pose a risk to human health or to the environment”.

“Trifluoroacetic acid continues to be found in the environment, including in remote regions, although concentrations are currently very unlikely to have adverse toxicological consequences for humans and ecosystems. While TFA is formed from the HFCs and HFOs regulated under the Montreal Protocol, a large amount of TFA was naturally formed over millions of years and has accumulated in the oceans. An unknown amount originates from fugitive emissions from chemical manufacture, waste disposal sites, laboratory use, and degradation of pharmaceuticals, pesticides, and industrial chemicals containing the trifluoromethyl group.”