The US NOAA (National Oceanic and Atmospheric Administration) has released its 2019 update of the AGGI (Annual Greenhouse Gas Index), which follows the evolution of the radiative forcing (ability of all greenhouse gases to trap heat) since the onset of the industrial revolution. The HFC impact in 2019 is now 1.08% of the total (compared to 1.03% in 2018). The five major greenhouse gases (CO2, CH4, N2O, CFC-12 and CFC-11) account for about 96% of the direct radiative forcing by long-lived greenhouse gas increases since 1750. The 15 minor halogenated gases (listed below and including HFCs) contribute the remaining 4%. 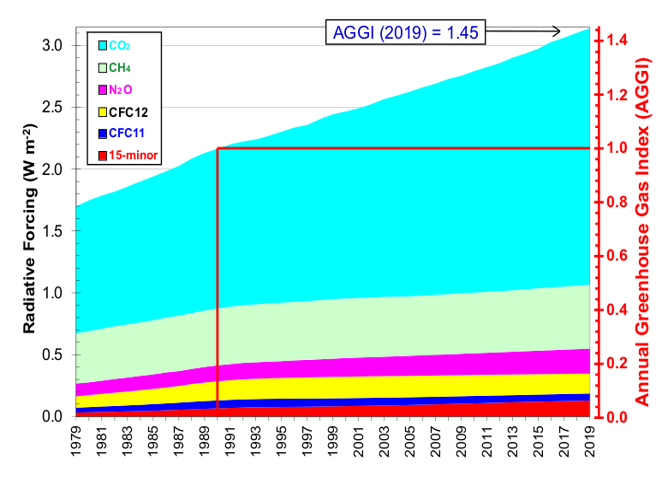 Radiative forcing, relative to 1750, of all the long-lived greenhouse gases. The NOAA Annual Greenhouse Gas Index (AGGI), which is indexed to 1 for the year 1990, is shown on the right axis. HFCs are included in the 15 minor gases category (red band) and in 2019 were about 25% of this category.

Of the five long-lived greenhouse gases, CO2 and N2O are the only ones that continue to increase at regular rates over decades. Radiative forcing from CH4 increased since 2007 after remaining nearly constant from 1999 to 2006. While the radiative forcing of the long-lived, well-mixed greenhouse gases increased 45% from 1990 to 2019 (by ~0.98 watts m-2), CO2 has accounted for about 80% of this increase (~0.78 watts m-2). The Kigali Amendment to the Montreal Protocol controls future production of HFCs to ensure that radiative forcing for these substitute chemicals does not increase substantially in the future. 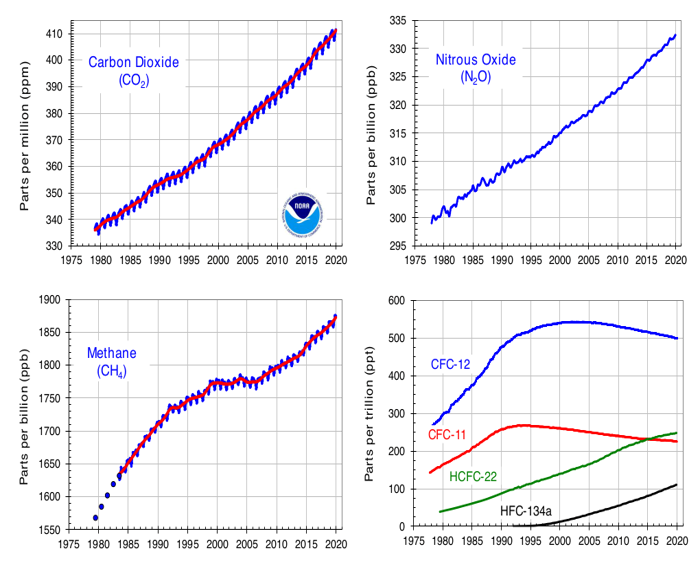 Explanatory note 1: The AGGI is a measure of the climate-warming influence of long-lived trace gases and how that influence has changed since the onset of the industrial revolution. The warming influence of long-lived greenhouse gases is well understood by scientists and has been reported by NOAA through a range of national and international assessments. The results reported are based mainly on atmospheric measurements of long-lived, well mixed gases and have small uncertainties. They encompass all emissions of greenhouse gases, including those from countries that do not report under the Rio Convention. For 2019, the AGGI was 1.45 (representing an increase in total direct radiative forcing of 45% since 1990). The increase in radiative forcing from CO2 alone since 1990 was 60.6%. The decline in the CFCs has tempered the increase in net radiative forcing. The AGGI is updated each spring when air samples from all over the globe for the previous year have been obtained and analyzed.

Explanatory note 2: Radiative forcing is the change in the net, downward minus upward, radiative flux (expressed in Watts per square metre; W m-2) at the tropopause or top of atmosphere due to a change in an external driver of climate change, such as, for example, a change in the concentration of carbon dioxide (CO2) or the output of the Sun. For the purposes of the WG1 AR5 report, radiative forcing is further defined as the change relative to the year 1750 and, unless otherwise noted, refers to a global and annual average value.